MODAA was originally developed by our office beginning in 2003, and it was a project initiated by studio co-founder Judit Fekete-Pali. After several years of renting offices around Los Angeles, she felt it was finally time SPF:a owned the building it occupied. While her first thought was to buy a property and renovate it, Judit had by chance come across an empty lot advertised for sale along Culver City’s Washington Boulevard 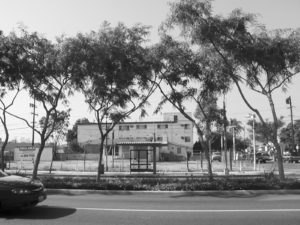 . The price was too good to pass up and she drafted a scheme to erect from the ground up. Today, this building holds not just our design studio, but a global modeling agency, a co-working space, and the SPF:a Gallery.

The 1920s Meets the Early Aughts

MODAA (as the building was been dubbed upon completion in 2006) was designed to capture the flavor of the city’s 1920s Art Deco past without conforming to the historic style. As the site is located exactly on the transition line between The Helms Bakery District 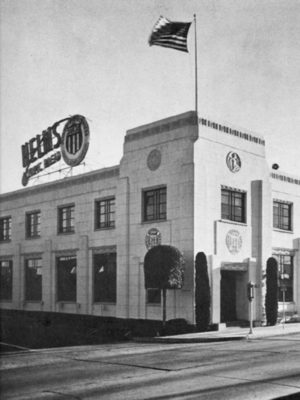 and Culver City’s then still developing eastern corridor, we saw the building as a visual representation of the old and new of Culver City and a gateway to the city’s burgeoning arts and design community.

The facade reflects the variation, movement, velocity, and tempo of the Culver City on all scales, and we originally installed yellow, white, and grey panels 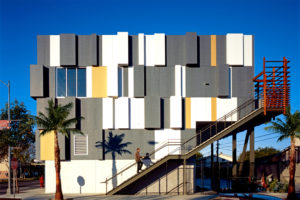 , a color scheme that we felt, too, was symbolic of the area. A series of LEDs were also installed on the façade’s southwest corner with the goal of mesmerizing passersby from the outside at night while creating a playful invitation to would-be restaurant clientele (up until 2009 The Wilson could be found on the first floor). In 2007, the building’s façade was officially designated by the City’s Cultural Affairs Commission as “Architecture as Art.” It was the first to ever receive such recognition.

In 2017, we noticed that there were several cracks in the facade of MODAA 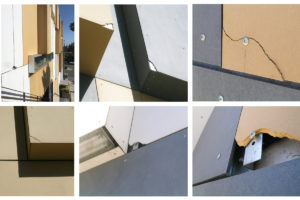 . After some investigation, we realized that the product we were sold 10 years earlier had been deemed substandard and that the manufacturer had incorrectly advised on its installation. Because of the fissures, and those that would eventually materialize, we decided to replace the entire facade of our building.

In place of the existing panels, our team spent several months removing and replacing them with black and white Nordic Cement Panels. Following the original design, the panels protrude at various depths, and more practically serves as a rain screen, additional insulation, and provides a 340-ft acoustic diffuser to Culver City’s main artery, Washington Avenue.

Although the renovation was spurred by safety concerns, we treated the repairs as an opportunity to revitalize and redefine the building, the block, and its environs. The project has indeed had a positive residual effect on surrounding small businesses by elevating the streetscape. And though Culver City has changed dramatically over the last decade, we still see MODAA as a visual representation of the old and the new the city, and a gateway to what is still to come.