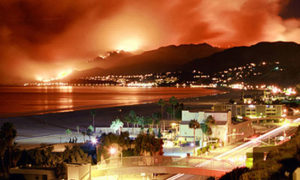 . Since reopening in 2013, the Stunt Ranch station has been used as field research unit by UCLA faculty, staff, students, and sister campuses. The spaces also support a number of K-12 programs where students study the local ecology of the surrounding 310 acres and engage in lab work, field experiments, and workshops.

Because the fire had degraded the soil, standard footings or foundation could not be used to meet the city’s building codes for a new structure. In fact, the site was deemed unbuildable with more than 100 feet of landslide having filled the site (all of which still remains today). UCLA was told that if it wanted to introduce a new building onto the ranch, it would have to be a mobile structure such as a trailer.

We responded to this challenge by developing a creative frame system with levelling plates upon which a fully-built-out structure could be set. The system would allow the building to respond to any differential settlement (ex: an earthquake) by relevelling itself or allowing UCLA to move the facility entirely offsite—the frame is essentially a snowshoe for the building.

The assembly itself is in many ways a standard construction, erected with metal studs, exterior metal siding, concrete, rigid insulation, metal deck roof, and a composite metal deck floor—it is only differentiated by its unique foundation, or lack thereof. The spaces are also supported by a photovoltaic array, a composting toilet, and two 5,000-gallon water tanks for use in the event of another fire.

In addition to wanting to reinstate a functional, flexible, and safe educational facility back onto the property, we also took a very budget-conscious approach. The building cost just $1.2M (or $200/square foot) to construct.