Our relationship with the Shakespeare Center of Los Angeles (SCLA) dates back to 2003 when we provided the organization's downtown building with several tenant improvements1. Although they were largely happy with their facilities, since moving into their building nearly 20 years ago, the SCLA has longed for a more usable, modern theatre. Years later we would draft a new theatre concept 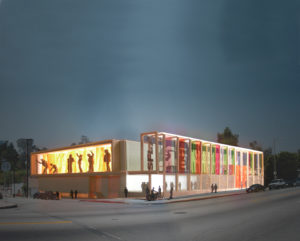 for the SCLA, but for financial reasons, it would never materialize. More recently, however, the theatre has seen a significant increase in donor interest and with that have deemed it finally time to realize their new home—and one bigger and more state-of-the-art than initially imagined.

A Bit of History

In understanding the design of this theatre, it is very important to understand the origins and the intent of the organization itself. In 1986, the SCLA presented its first Summer Festival, with performances of “Twelfth Night” in Pershing Square 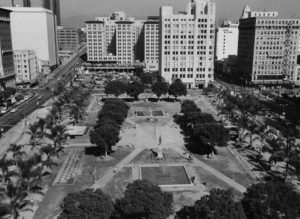 . The audience included friends of the performers and SCLA staff, a few earnest theatergoers, and the homeless residents of the Square.

This performance was certainly unlike any ever held before it in that the homeless became an important part of the nightly production, ushering guests to their seats. They also joined in on the promotion and management, handed out programs, answered questions, and thanked theatergoers for their attendance.

Then one night, the newfound hosts presented SCLA founder Ben Donenberg with four large trash bags filled with aluminum cans. Wanting to contribute, they explained to Donenberg that he could take the cans to a recycling center and get a nickel apiece. Deeply touched, Donenberg declined their offer and instead created the “Food for Thought” admission policy. He asked that audience members, in lieu of purchasing a ticket, to donate food for the needy to gain admission. His response would shape the mission of the SCLA for the next 32 years.

The State of Affairs

The SCLA currently functions within a dated 1960s construction unable to accommodate its growing needs or its desire to expand its youth outreach. Unlike a typical playhouse or theatre, their primary mission is to educate children from all backgrounds on the works of Shakespeare and the art and science of theatre. The SCLA does this through Will Power to Youth, a hands-on, paid-job training program where at-risk youth work alongside veterans and theatre professionals, engaging in everything from set building to operations, ticket sales, marketing, and even scriptwriting (the center is known for adapting Shakespeare’s classics into contemporary storylines). When scouting a new location for the theatre back in 2000, Donenberg strategically chose a site within a two-block radius of three Title One high schools. These schools serve approximately 20-percent of Los Angeles’s youth living at or below the poverty threshold.

Our "reboot" of the theatre is strongly centered on maximizing what is already available to us. This is in part due to the theatre's budget and in part our desire to reduce the environmental footprint of the new building.

Instead of building from the ground up, we are taking the original 1964 warehouse construction and adapting it as a two-story, 16,200-square-foot, state-of-the-art public theatre. By repurposing the existing roof and overall structure, we will not only be able to achieve a more cost-effective build but direct donations for the new theatre towards more meaningful, detailed facility improvements. Some of these upgrades will include retractable seating, a stage trap, classrooms, workshops, and other supportive, flexible spaces for administration and day-to-day theatre operations 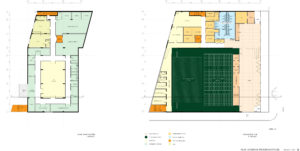 To achieve these changes, the existing building will undergo a number of structural changes, the two most radical of which will raise the current roof raised by 20 feet and see a hole punched in the floor for a stage pit

Seating will also become retractable. This feature we felt was very important as it provides the SCLA with a flexible open space for teaching and theatre in the round. The stage can also be turned into a soundstage, rented out to recording and film businesses between productions and providing the SCLA with another source of income.

The new theater will also incorporate a green roof to absorb sunlight and better insulate the building, as well as rainwater collection for irrigation.

—Before and after: from stage to green screen (2)

While the renovation of the SCLA is largely focused on making functional improvements to help the theatre improve on and expand its offer, we’ve also implemented several defining architectural features on the exterior. A ribbon facade inspired by the traditional Elizabethan ruff worn by Shakespeare and those of his era will wrap three faces of the building. The pattern of the ruff provides a basic shape but is then pushed and pulled to create dynamic moments on the facade. Some instances will allow for signage, while others will house more exciting elements that play with shadows and light for passersby to enjoy. To further engage with the street, we plan to outfit the ground floor with folding doors that will enable an indoor/outdoor gathering space. Symbolically, the ruff will provide a visual link to the SCLA’s roots and purpose, while also communicating its new vision and attitude.

Looking to the Future

This project represents a unique effort by numerous and varied individuals who all share and support the same goal: to create an inspiring space where the magic of Shakespeare and theatre can be made accessible to all.

Although the SCLA’s current facilities are not as illustrious as some of Los Angeles’ other performing arts venues, their playbills are often bolstered by bold-faced names such as Tom Hanks, Helen Hunt, Sir Anthony Hopkins, and Tracy Ullman, all of whom perform without compensation. We wanted our design of the center’s new space to help them capture some of the same renown. The architecture will integrate a number of defining graphic elements to turn what’s now an innocuous building into a recognizable, branded destination.