The Line Lofts represents our second multi-family residential project with Los Angeles' Integrated Development, and our first with Wilshire Skyline. As with our previous project, Woodbridge12, the design of this Hollywood building was a collaborative process where we worked closely with the developer to ensure that quality of life could be maintained, if not elevated, among 82 densely packed apartments. Given the site's narrow dimensions1, we knew if we wanted to create a collection of well-lit, well-articulated homes, we would have to abandon the traditional apartment floor plan.

Throwing out the Filing Cabinet

The building abandons a standard filing cabinet layout instead assuming a C-formation and dispersing its circulation space in an unconventional but far more fluid way. Oftentimes, even the newest of apartment buildings can feel suffocatingly mundane or monotonous, where one level is only distinguishable from the other by its wayfinding. We designed the structure so that there are several multi-floor connections provided at various elevations, with the second and third floor linked, the fifth and sixth joined, and the open-to-sky “courtyard” merged with the sixth.

The multi-level communication we employed is intended to remove any feeling of sameness or repetition. Corridors and connections are, too, open and this plein air architectural circulation gives way to “moments” within passages that are traditionally ignored. Egress has been moved to the exterior 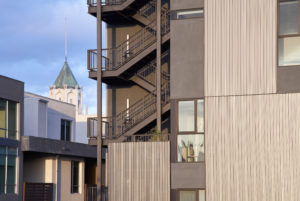 to free up interior space and encourage residents to use the stairs as alternative circulation. We wanted residents of the building to feel comfortable walking around their building, rather than seeing everything between their front door, car2 or main entrance as an obstacle.

We also retooled how units are distributed, organizing lofted apartments on both the ground and top floors

, and single-floor units in between 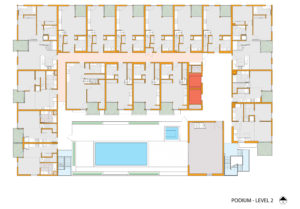 . We felt that by putting double-floor units on the first floor we could open up these spaces and afford them more light and privacy—essentially making what are typically less desirable units into prime apartments. These larger ground-floor apartments also better serve professionals who work from home and have frequent guests or clients over.

Amenity spaces include a workspace and wet bar in the lobby, a courtyard pool, and a recreation room with operable glass walls that allow the interior to flow into a pool area. A sky lounge tops the building with unobstructed views of the Hollywood Hills and the Los Angeles skyline 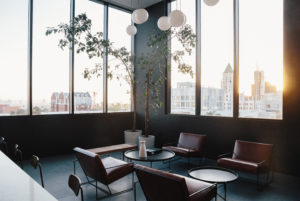 . This room uniquely has an exposed foyer. In this area there is enough area for seating and plantings, we used the architecture of the building to frame the sky. We saw this space as another way to add character to the building.

Apartments, too, are designed to optimize natural light and engage with surrounding views. Each home features oversized windows, glass sliders, and an atrium balcony. By recessing the balcony from the facade, three sides 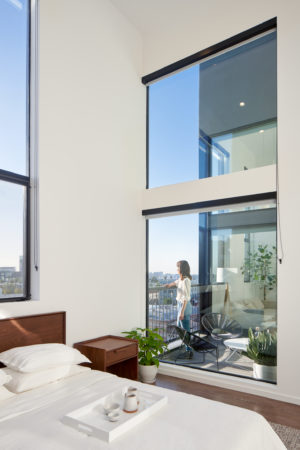 of this space are exposed and entering light is amplified 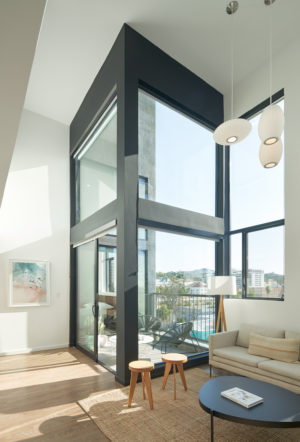 . The street- and courtyard-facing units are partially shrouded with perforated screens, offering them more privacy without the need for curtains 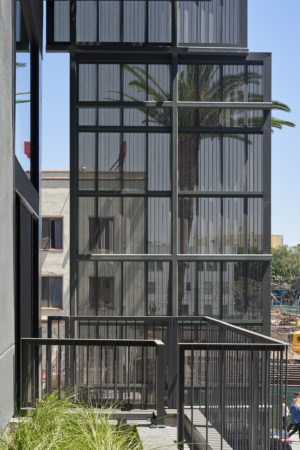 Visually, we were interested in capturing the rugged industrialism that may have pervaded the area prior to the Golden Age of Hollywood; we were not interested in a glitzy Academy Award, happy Hollywood aesthetic, but more of what you might encounter in the back lots or on the sound stage of a movie studio.

As often comes into play, budgetary constraints played a role in materiality, pushing us to think creatively about how we could use off-shelf products to bring the cost of construction down while still maintaining a custom look.

Our original intent was to have an all-metal facade, but because of the high cost, we decided to use a combination of corrugated metal and plaster, alternated to create an animated pattern between the smoothness of the plaster and the roughness of the metal. Despite being a characteristically gray structure, the reflective metal captures the sky’s changing hues throughout the day, offering a sense of a building always in flux, responsive to its surroundings—a detail very important for a structure of this mass.

We also adapted the building’s framing system to bring costs down and to shorten the construction schedule; the first floor of the building is concrete while floors two through six employ a prefabricated wood frame.

For the Love of Light

Fundamentally, what we really wanted from this project was to improve upon the rigid living environment that’s typically associated with multi-family residential buildings. Our goal was to get light as deep into the spaces as possible, and details we would normally implement in a custom home we tried to achieve in these apartments.

Our hope is that those who inhabit this building feel as if they are within a private home when their doors are closed, but as they move throughout their building that they are inclined to explore and enjoy all its facets.